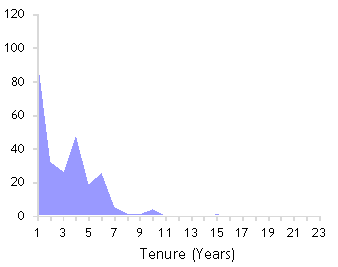 As a leading provider of health insurance, managing costs are critical to MetroPlus. With $700 million in revenue under constant pressure from rising expenses and razor-thin margins, knowing where every dollar goes became a top priority. The organization’s rapid growth in recent years added layers of complexity and infrastructure, as well as hundreds of new employees. To support the growth, MetroPlus built additional programs to train and develop new hires and to expand the skill sets of existing staff. Millions of dollars were invested in employee and career development, but the costs of these programs, let alone the ROI, were unclear. Were these programs cost centers? Or were they revenue drivers? How did turnover impact the cost per employee? How high were competitors’ turnover rates compared to those of MetroPlus?

To get the answers to these and other critical financial and HR questions, MetroPlus turned to Retensa’s HRMetricsPro. MetroPlus needed a clear, accurate, and comprehensive assessment of their employee costs and turnover rates, and Retensa’s analysis revealed the total annual cost of turnover to be $14 million and growing. Since the analysis determined which components were most costly, it enabled MetroPlus to focus on those HR processes, especially the recruiting methods that were not producing long-term candidates. They could now re-allocate those funds to sources that generated the best candidates. MetroPlus also discovered exactly what their true orientation and training costs per hire were. On the basis of this analysis, they now can make accurate forecasts of future costs and staff growth while measuring HR effectiveness and comparing their company to human resource industry benchmarks. On the other hand, if staff growth slows, they will know by how much to shift resources from onboarding to other development areas, thereby increasing ROI across the Employee Life Cycle and having a strategic competitive advantage.

Sperry Federal Credit Union, a nationwide financial institution established in 1936, grew to serve over 17,000 members from hundreds of companies. In fact, after 6 straight years of double-digit growth, Sperry employees felt they were under more pressure than ever before, with larger numbers of new employees needing to be hired, onboarded, and trained. This growth had created a stressful situation for HR, resulting in employees becoming frustrated and disengaged with their work, lowered job satisfaction and morale, and greatly increased turnover.

Working with Retensa, Sperry decided to upgrade its human resource processes for attracting, developing, and retaining top talent. They wanted to be both an employer of choice and to create a workforce that routinely functioned at peak level, while at the same time cutting hundreds of thousands of dollars of inefficient HR activities and processes. Turnover was reduced from 24% to 6.6%, cutting total turnover costs by more than 40%.

With older generation managers struggling to manage younger generation employees, Evonik came to Retensa seeking help with their leadership training program. However, after several rounds of communications, Retensa found out that the cross-generation leadership problem was just a symptom of other more pressing issues, and more work could be done to improve organizational efficiency. To better analyze the problems, Retensa recommended that Evonik conduct an organizational diagnosis using HRMetricsPro.

Retensa calculated more than 50 metrics to analyze the talent indicators or levels in different ELC stages, resulting in numerous inspiring findings. For example, Retensa discovered that employees with fewer than 2 years of tenure were leaving at a higher rate than longer-tenured employees. Meanwhile, in 2012, the majority of 40-49 year olds leaving were rated as “Highly Effective” performers; more than half of 60+ year olds leaving were “Excellent” or “Highly Effective.” Retensa alerted Evonik of its attrition risks, that their retention practices were not working well in certain population segments. Moreover, optimizing personnel selection tools and onboarding processes could boost the retention of employees with fewer than two years of tenure.

According to performance measures, it appeared that only 3% of employees were most highly-rated as “Excellent,” while 3% were in the lowest categories of “Unsatisfactory” and “Needs Improvement.” The remaining 94% were in the categories of “Highly Effective” and “Achieves Expectations.” This implied that the current performance measures did not adequately distinguish high-performers from low-performers. Retensa offered further recommendations on performance management.

Retensa provided Evonik with the whole talent picture to demonstrate where the organization was doing well and where it could improve.

At Technology Transportation Expediting, VP Kell Scruggs commented, “We were finding it harder and harder to attract, and retain, our best drivers – making it hard to keep our shipping commitments to customers. Driver turnover was approaching 67%, and finding and training competent new drivers was becoming more and more expensive.”

Retensa’s HRMetricsPro showed us how costly it was for us to advertise, interview, hire, and train new drivers each month – it all added up to a huge expense. Their analysis enabled us to see this information about the total cost of turnover as an opportunity not just to save money and improve HR processes, but also as a way to stabilize our workforce by motivating and developing our drivers as we reduced turnover. Retensa helped us cut driver turnover from 67% down to 16%, which allowed us to reduce our total turnover costs by $4,000 to $5,000 per employee and to meet our customers’ needs more effectively and efficiently.

Quantify and Track Your HR Activity